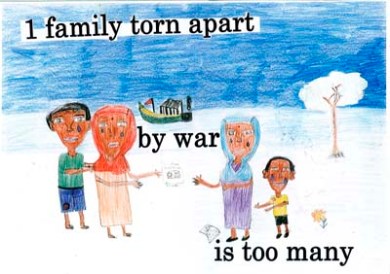 People who needs protection in one point of view, but considered disturbing in the other one. One group of people  who are considered doing bad things in one country could be one deserved to get an asylum in another country. One (considered) mad man will be committed to asylum because of doing dangerous actions in one society.

Asylum is just one place that provide protection until the society can understand what the people and mad men have done. Their actions are just their unique love that will be proven as pure as what saints have showered to the human kind. Their madness is just a way to unravel the twisted knead in their concept of life.

Let’s help ourselves accept the people now living in asylums as they are. They are human beings like us who are waiting to be reborn and become the best light worker on earth.

Want to learn the simple way?

Our hearts are home, secured in God's Love. Find Hope, Love and Encouragement in The BELOVED.

A collective of poems and photos.

Coffee For The Mind, inspiration for the soul!

Daily Thoughts and Meditations as we journey together with our Lord.

True wealth is the wealth of the soul

The Art of Blogging

Be careful, I might convince you.. You are art.✨

A blog full of tips, inspiration and freebies!

Listen, and keep it clean

Articles on Spirituality. Psychology, Mindfulness, Spiritual Enlightenment & a Collection of my Poems.

If you are always trying to be normal, you will never know how amazing YOU can be. Maya Angelou

Apps for any screen

From soul to soul

My Life on the Farm

4 out of 5 dentists recommend this WordPress.com site

just a little nod in the ocean

A journal of an Indonesian in The Netherlands

Inspiration to live your yoga from a passionate yogi & yoga teacher

Haiku out of Africa

It's about My World !

Listen to your inner self..it has all the answers..

me and my story

A melancholic thinker who thinks too much

Off the wall, under the freeway, over the rainbow, nothin' but net.