Have you ever been discriminated? Based on any factors – religion, ethnic group, age, political stance, sexual orientation, education, gender, et cetera any other possible ways which are all possible under the sun. I’ve seen people discriminating and being discriminated. So sad, vulnerable and weak.

Imagine a group of migrant workers among a crowd of locals in a factory, they are of weak bargaining position. At the end of the day they will say yes to any tasks given as long as they can survive until at least the contract is finished.

Someone told me of being discriminated based on gender – the same job description, the same  length of tenure, different gender, different salary & benefits. What would you do?

And, in a modern country whose per capita income is the highest in the region people are ghostly discriminative against migrant workers. When people are jealous and out of clear thinking, they would think as wild as the charging bull. They think migrant workers are not as good as them, even the skill is proven against time and space. In their mind is only “getting rid of those foreigners who have taken our job opportunities”. Educated is just a word, they are not well educated actually.

Are you white? Or, black? Or, colored?

Some people — some — respect whites more than they do black or colored. I have been colored since I was born and I am thankful for being naturally safe from skin cancer but was once — twice, thrice, etc — so disappointed when local people serve my white colleagues better, treat them as if they were hints and queens. In fact, they are just THE SAME. What’s wrong with you, local colored people? Do you think white is more just because they are white? Wake up!

You treat animals like sh*t “just” because they are animals? That is a wider discrimination. And, this is even to helpless creature that have nothing but instinct to cry to the Universe.

But, when humanity and love are gathered in someone’s heart…. Discriminating is a ridiculous thing, a self mockery? Nothing but absence of sanity and clear thinking —

Love yourself. If you want others to respect you, respect others first. Love yourself more…. If you love yourself, you’ll love others and will never discriminate with any single basis possible which are all possible under the sun. 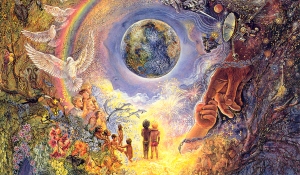